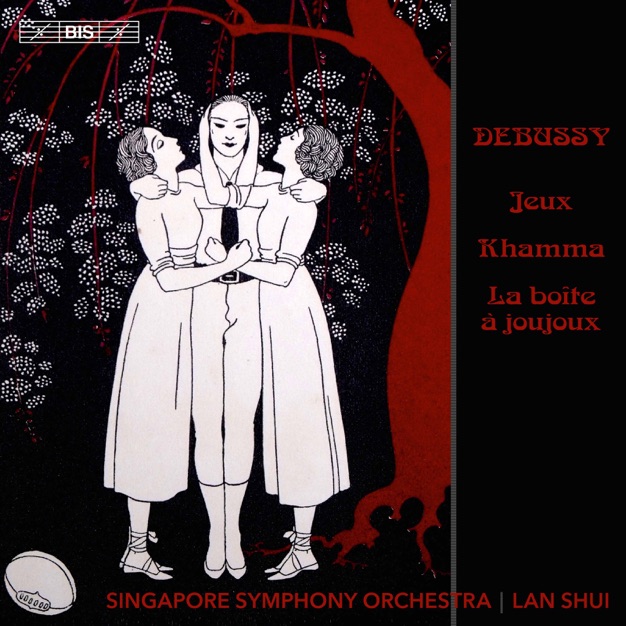 “Shui proves a first-rate interpreter of all three works. Jeux is startlingly dramatic, the ebb and flow of the music beautifully judged…. It’s all essential listening if you’re interested in the relationship between music and dance.” (GRAMOPHONE)

“an exceptionally sympathetic and evocative performance by Lan Shui and his Singapore players. … Shui finds a perfect balance between the textural clarity and gentle nostalgia of Debussy’s writing to the point where I would say that this is as persuasive a performance as I have heard. … deeply impressive performances both interpretively and musically, presented in demonstration SA-CD sound, and you have a truly excellent disc. Another BIS triumph.” (MusicWeb International)

Several works by Claude Debussy have become ballets ‘after the fact’, so to speak – as early as 1912, Nijinsky and the Ballets Russes used his Prélude à l'après-midi d'un faune, and later choreographers have created ballets based on scores like Printemps, Gigues (from Images) and Nuages and Fêtes (from Nocturnes).

Debussy only conceived three works as ballets, however, and those are gathered on this present disc from the Singapore Symphony Orchestra and Lan Shui. All three were written between 1911–1913, during a period when the composer was under some financial pressure, and in the case of Khamma, Debussy himself admitted that ‘considerations of domestic finances’ contributed to him undertaking the commission for this ‘danced legend’ about an Egyptian dancer struck down by the sun-god Amun-Ra. Having finished the piano score, Debussy asked Charles Kœchlin to complete the orchestration under his supervision. He was more enthusiastic about a commission from the highly fashionable Ballets Russes, and did indeed complete Jeux himself – but only two weeks after the first performance, the company’s première of Stravinsky’s Rite of Spring completely eclipsed Debussy’s new work. Jeux had to wait until the 1950s for full recognition, championed not least by Pierre Boulez, who regarded it as one of the most prophetic works of the twentieth century.

Of the three works on the disc, it is probably the children’s ballet La Boîte à joujoux ("The Toybox") that gave its creator the greatest pleasure. He finished a version for solo piano in 1913 and dedicated it to his daughter Emma. The music includes children’s songs, bugle calls and imitations of musical boxes as well as parodies of well-known operas and quotations from his own and other works.