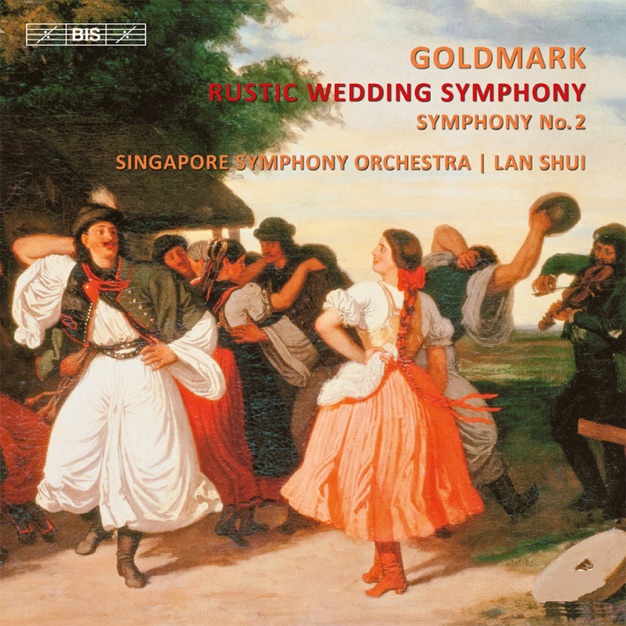 Music Web International, September 2013 ”…Lan Shui and the Singapore Symphony are fantastic throughout, showing not just a great color palette and top-quality orchestral sound but the kind of life, liveliness, and humour necessary.”

Mainly known today for his violin concerto, during his lifetime the Hungarian composer Karl Goldmark was praised for the quality of his instrumentation, his skilful use of folk music and his own Jewish heritage, and his evident gift for melody.

The author of several operas, among them The Queen of Sheba, Goldmark wrote music in most genres, and although largely self-taught he was sought out as a teacher of composition by Sibelius, among others. Composed in 1875, his ‘Rustic Wedding’ Symphony was his most popular orchestral work. At the first performance the audience hailed it as a triumph, and Goldmark’s friend Brahms said about it: ‘clear-cut and faultless, it sprang into being a finished thing, like Minerva from the head of Jupiter.’

The five-movement symphony has sometimes been described as a suite of tone poems, including a wedding march with variations depicting the wedding guests, a nuptial song and a bucolic wedding dance. Even though the work is now a rarity in concert, conductors such as Sir Thomas Beecham and Leonard Bernstein demonstrated their belief in it by performing it on many occasions.

Composed some ten years later, Goldmark’s E flat major symphony, Op.35, is far less well-known. Although its form is more traditional than that of its predecessor, it is similar in mood – bucolic and high-spirited – and provides rich opportunities to sample Goldmark’s skill as an orchestrator and musical colourist. Performing these unjustly neglected works is the Singapore Symphony Orchestra – a band which under its principal conductor Lan Shui has impressed reviewers in repertoire as diverse as Debussy’s La Mer (‘an unequivocally world-class performance’, BBC Music Magazine), Zhou Long (‘utterly compulsive… orchestral playing of the highest calibre’, International Record Review) and Rachmaninov’s Second Symphony (‘a moving, completely satisfying performance’, allmusic.com).