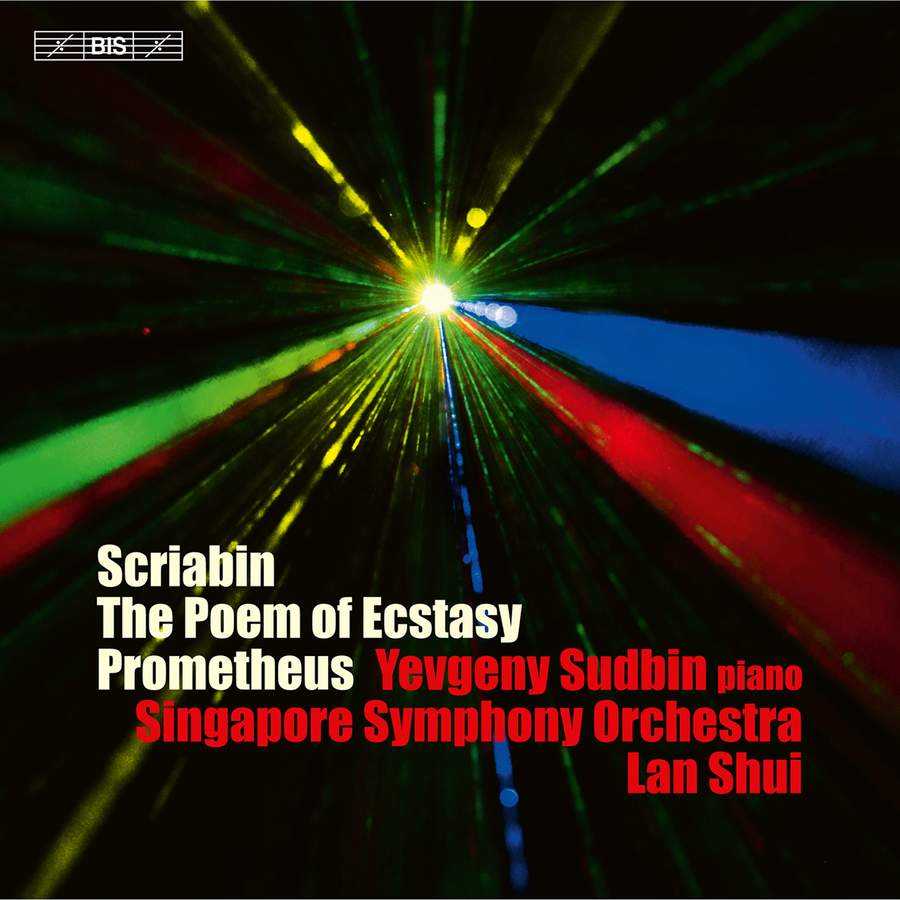 Scriabin - Poems of Ecstasy and Fire

"For all the yearning, roaring and burning, in both Ecstasy and Prometheus, [Lan] Shui balances expansive growth against a clear sense of direction. ... [The recording] capturing every moment-to-moment starburst with maximum clarity. " - Gramophone

"I am happy to hear the Singapore Symphony in this music. Conductor Lan Shui has a good track record with Impressionist works, and the orchestra reminds me of Eugene Ormandy’s Philadelphia Orchestra in terms of weight and general creaminess. BIS’s engineers are to be congratulated as well. This is a recording of astonishing realism. The organ at the conclusion of both orchestral pieces is powerful and floor-shaking. One would be remiss not to acclaim Yevgeny Sudbin in both Prometheus and the Fifth Piano Sonata. He has the perfect gleaming tone for this music, powerful and tight without a hint of harshness, along with a fine sense of rhythm. Scriabin’s main melody in the sonata has a built-in lopsided wriggle to it, just a touch sexy. Sudbin instinctively gets it right. This is an outstanding release in every way." - Fanfare Magazine.

"Lan Shui creates a very great tension from the very first bars [of Prometheus], giving expression to the fantasy nature of the composition. ... an imaginative conductor who spurs his orchestra and choir on to an outstanding performance. Evgeny Sudbin blends perfectly into this feverish sound. [Evgeny Sudbin’s recording of Piano Sonata No.5 is] is even more feverish, ecstatic. A great performance!" - pizzicato.lu

One of the boldest and most radical composers of all time, Alexander Scriabin had a lifelong obsession with occult and mystical ideas. Initially under the influence of Chopin, Wagner and Liszt, his music later became more complex, taking on an expressive power which provoked extreme reactions from audiences – of adulation as well as repulsion. Not shying away from hyperbole, Scriabin once declared: ‘I am the apotheosis of creation – I am the aim of all aims – I am the end of all ends.’

The three works featured on this disc belong to Scriabin’s final compositional period where the music seems to veer between voluptuous languor and striving energy. Composed back-to-back, the Poem of Ecstasy and the Fifth Piano Sonata are drenched in bitter-sweet harmonies and carefully constructed dissonances. The scores of both works make reference to the same poem – by Scriabin himself – which ends with the lines ‘thus the universe resounds with the joyful cry: I AM!’. In his last symphonic poem, Prometheus — The Poem of Fire, Scriabin aims even higher. Here he expresses the evolution of the world from formless chaos, through the appearance of mankind, fertilized by the divine spark, towards spiritual liberation and ultimate transcendence. The unusually large orchestra and a wordless choir produces a kaleidoscope of contrasts, colours and sounds caught up in an ecstatic whirl.